The WFN organized tailoring training for women ( 02 oct 2020 to 28 feb 2021) of “masks making and more” for women. The training has been organized through a supportive co-operation with the GESPA-Germany. The opening ceremony was inaugurated by the Ms. Kamal Upreti, president of WFN along with the great presence of the executive members of WFN, social activists, youth leaders and members of WFN.
The training has been started to build securing economic sustainability for Nepalese women. Secondly, this training will make them independent and self-sustained to make their future better. The key of success of this project is to develop a new generation of women with better opportunity for sustaining their life during this challenging situations. There are 15 participants (women) who will be directly benefited from the training. The basic training was provided for the women before. We believe this advanced training will enhance their knowledge, skill and capacity.
Leave a comment 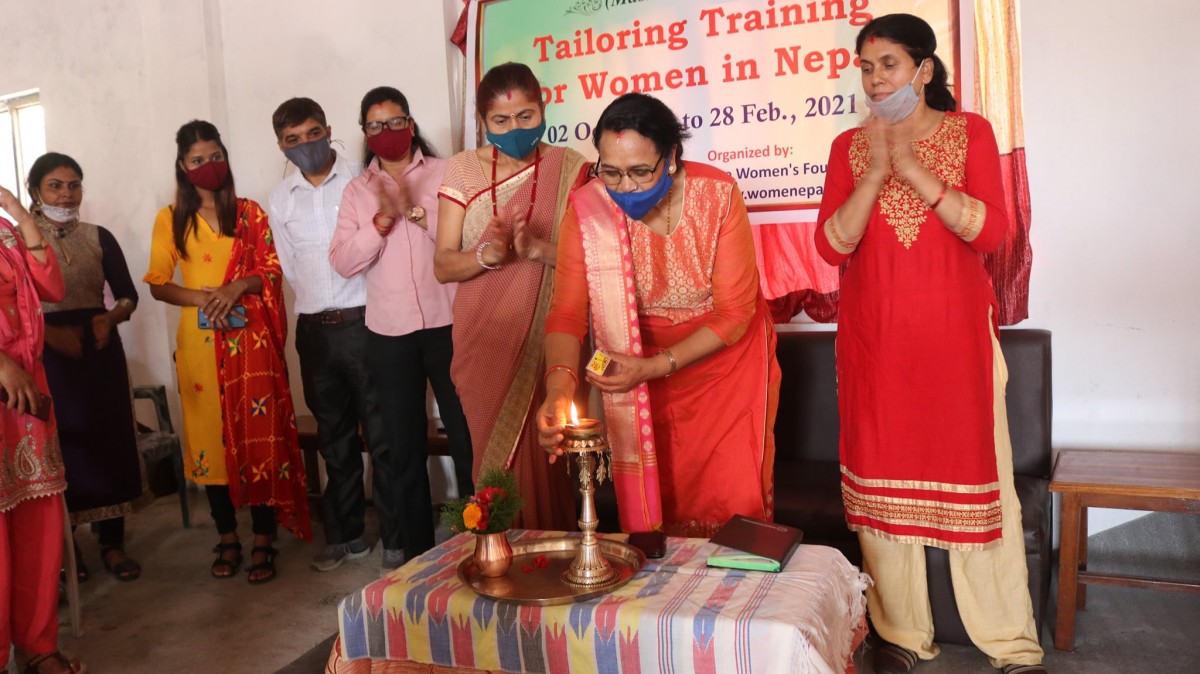 Dashain is one of the biggest festivals in Nepal and was celebrated at the end of October. At WFN we celebrated by putting a tika on the forehead and getting blessings from the elders.

Children from the shelter home came to the solidarity home and received a tika and blessings from Kamala Upreti, president of WFN and Devendra Parajuli, program supervisor of WFN. 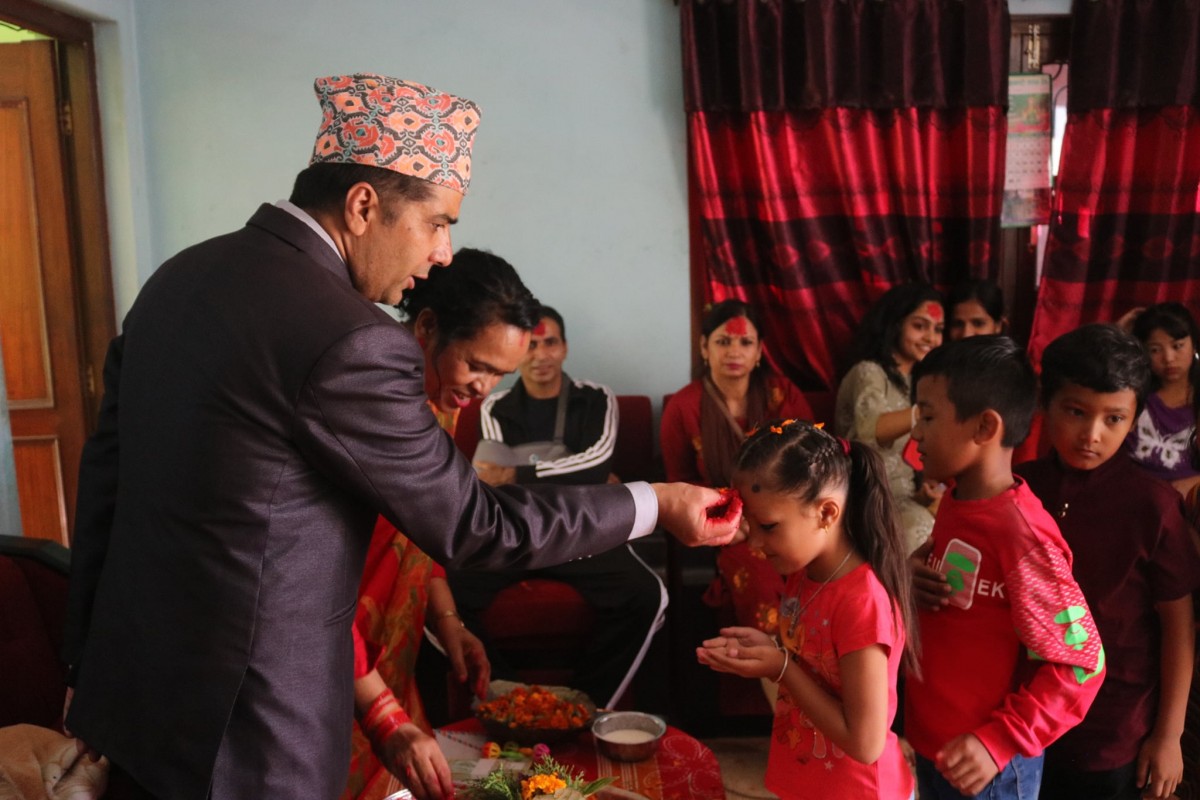 Issue Newsletter for the month of December, 2020 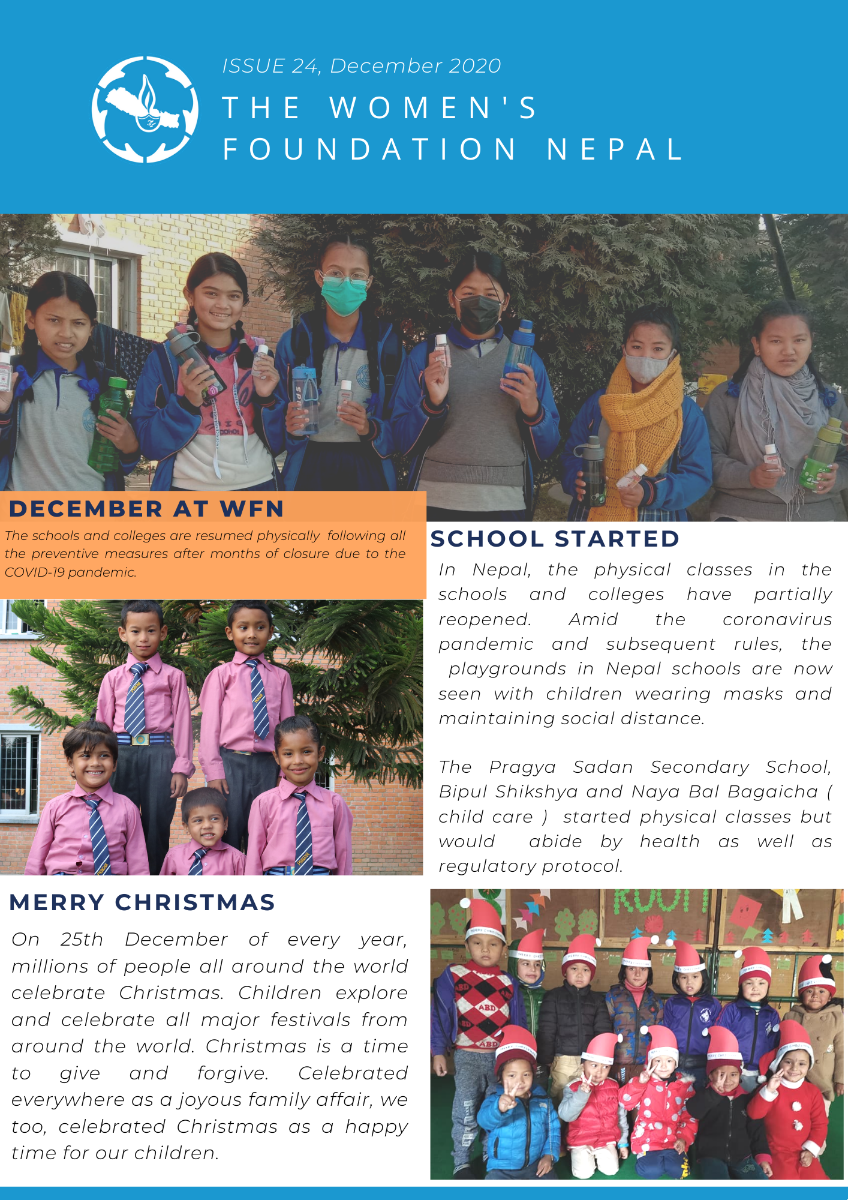 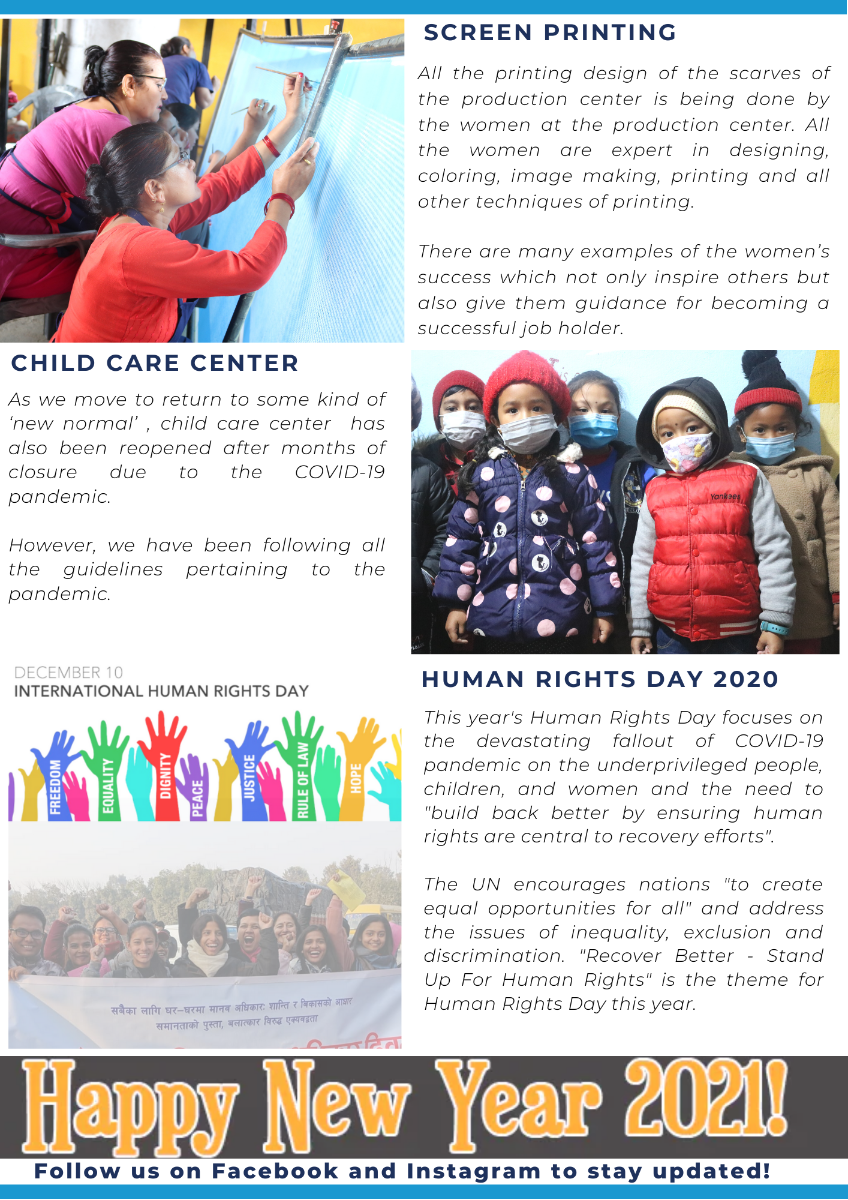 Issue Newsletter for the month of November, 2020 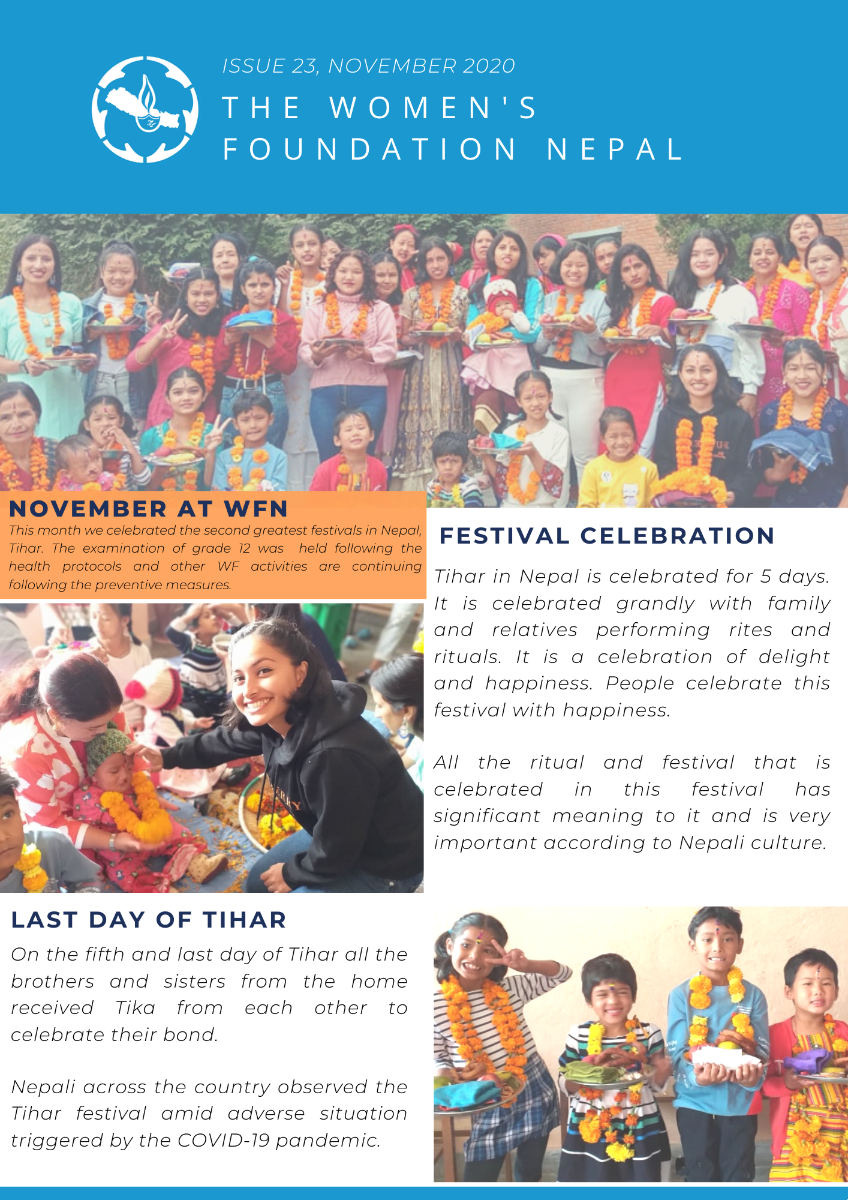 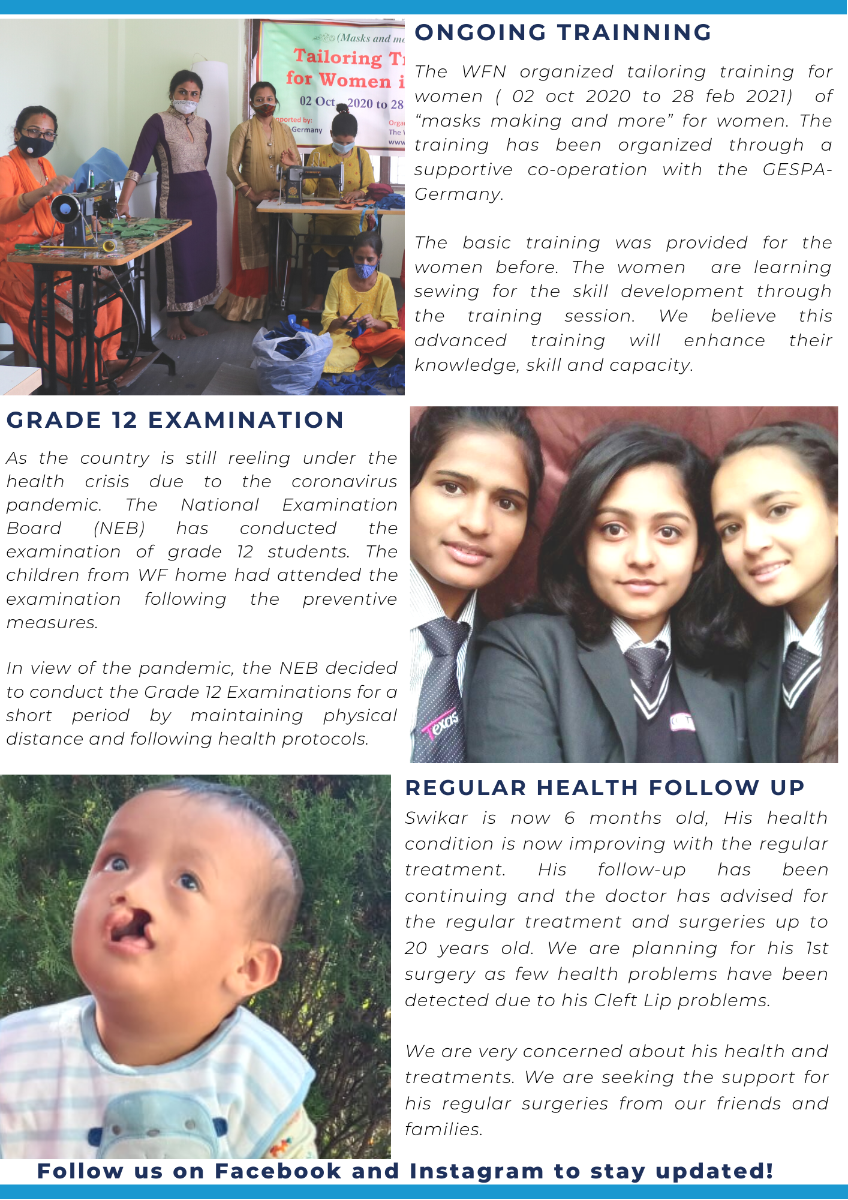 Issue Newsletter for the month of October, 2020 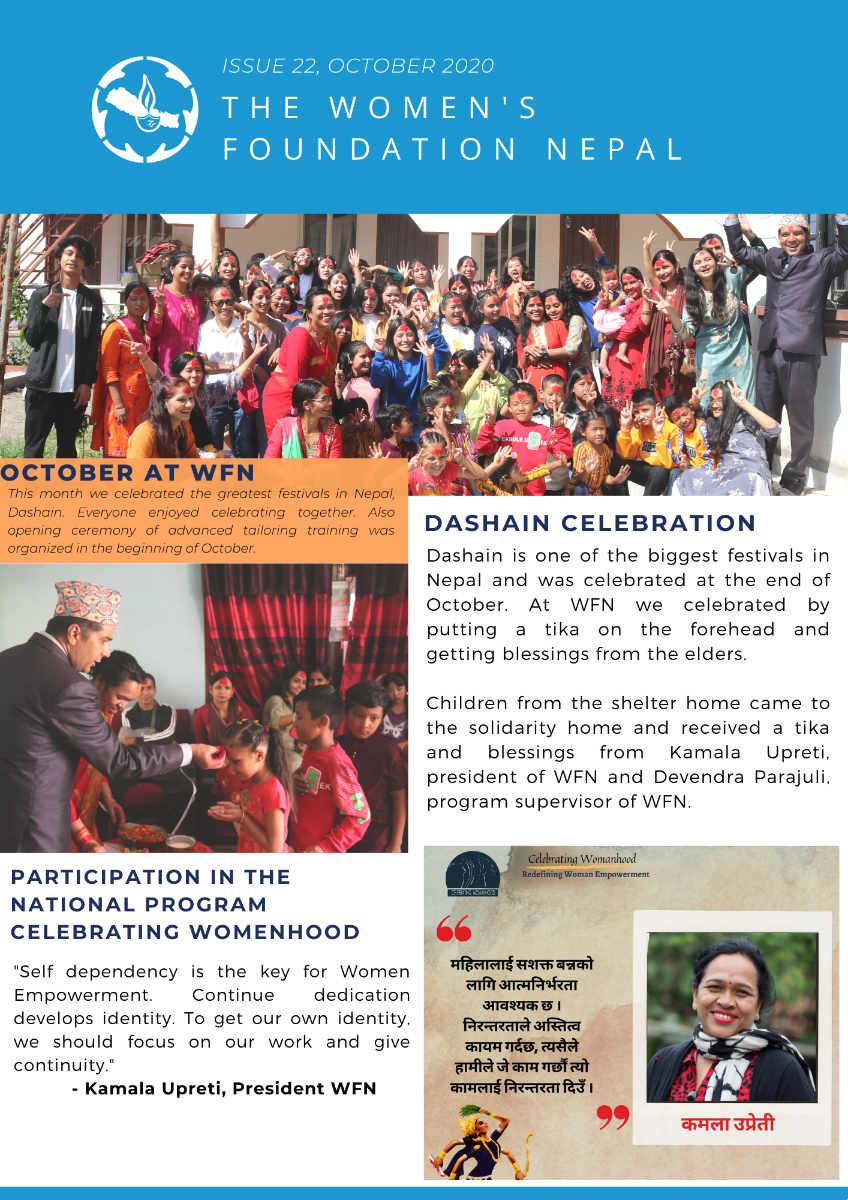 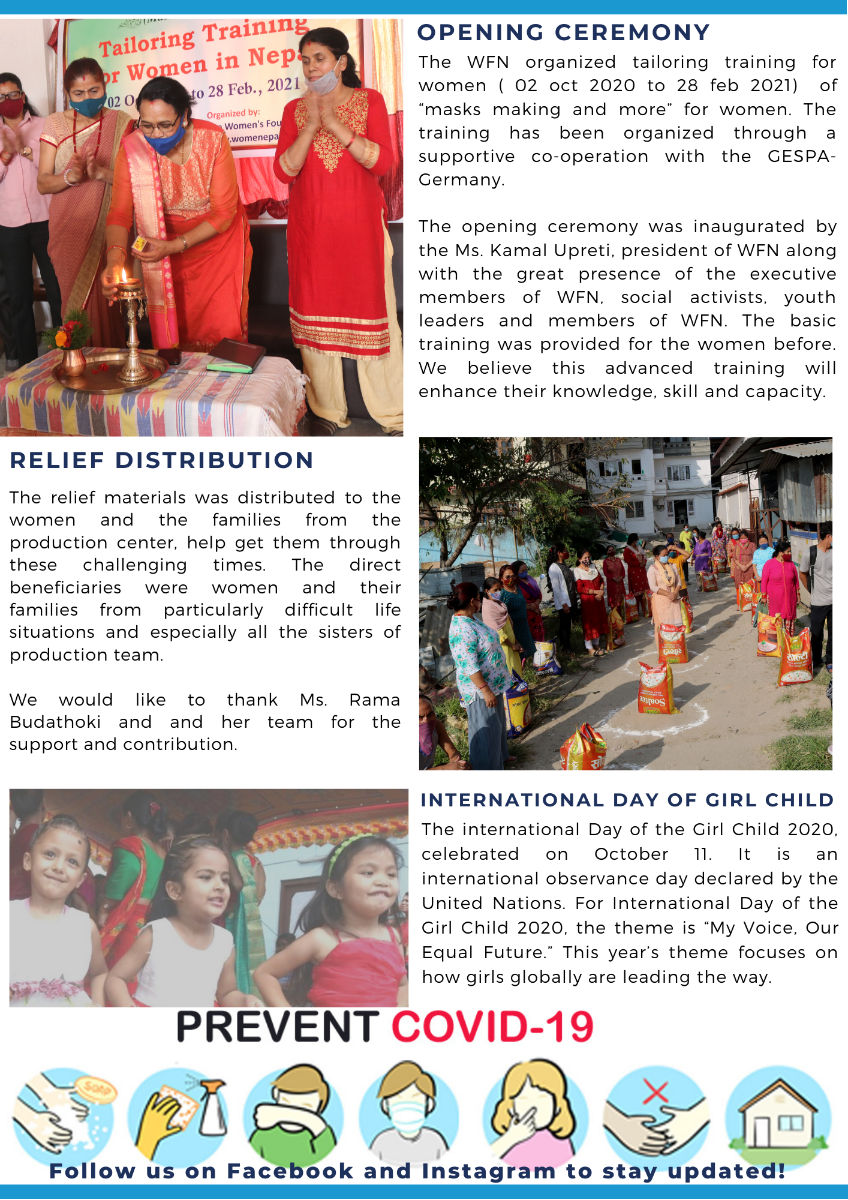 Issue Newsletter for the month of August, 2020 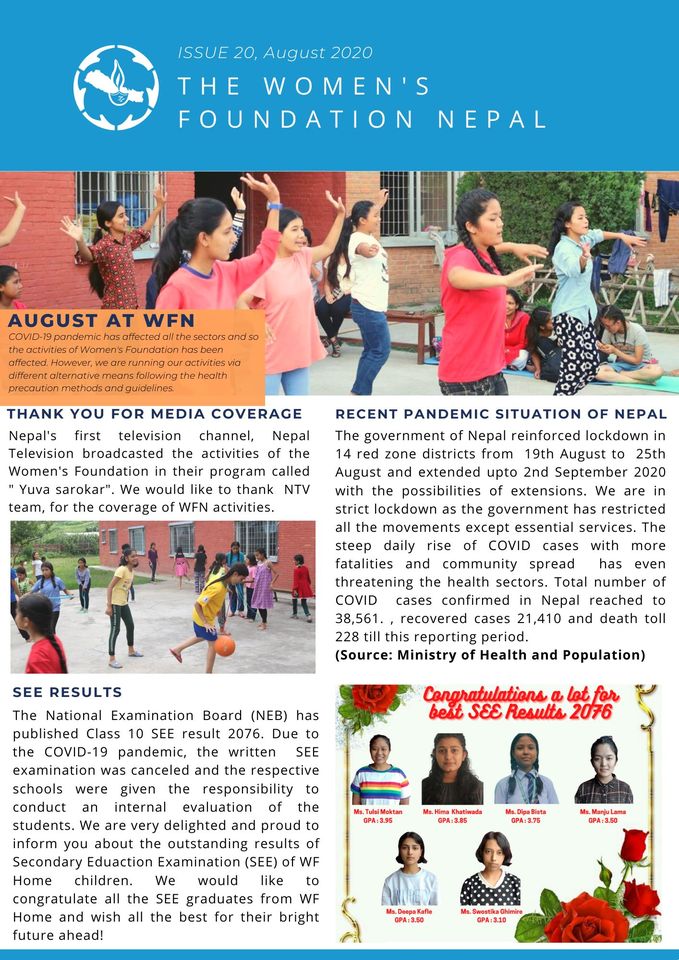 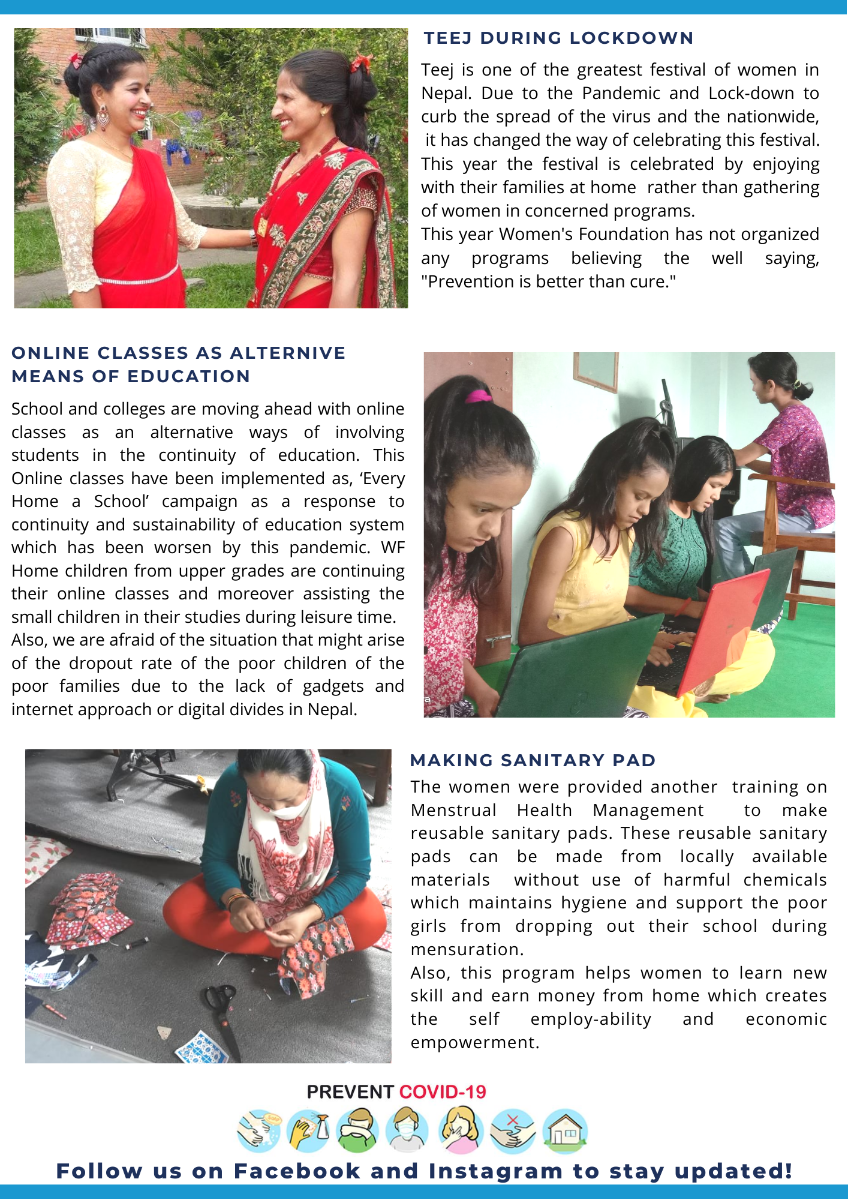 Rayan (changed name) started looking to fall in love with a girl, who according to him could be his prospective wife. He fell in love with a girl named Rosani (Changed name). Initial years of relationship went really smooth between them. The family members had a meeting and confirmed their marriage when they would reach the age they could legally marry. Inappropriately when a girl became 24 years, family of boy side changed their decision. They dominated girl’s family as being poor.

Rayan’s parents pressurized him not to get married with the girl. Knowing the strong opposition, the loving couple, finding no other way. They decided to end their lives for heavenly abode and to commit suicide together. The couple concluded to commit suicide by consuming poison after the family of Rayan opposed their alliance. They went in the jungle of Ithari. Before suicidal attempt, boy demanded for physical relationship. When she didn’t agree, he forced her and gave her poison at first. He then ran away from there.

After getting information about the incident, the local community took her to the hospital at the earliest possible moment, irrespective of the amount and nature of poison ingested. She was taken to hospital. In hospital also boy’s parents gave her mental torture and abuse her emotionally. WFN district office has filed a case against Rayan. WFN has been strongly and actively presented case on court for the punishment of culprits.

Issue Newsletter for the month of June, 2020 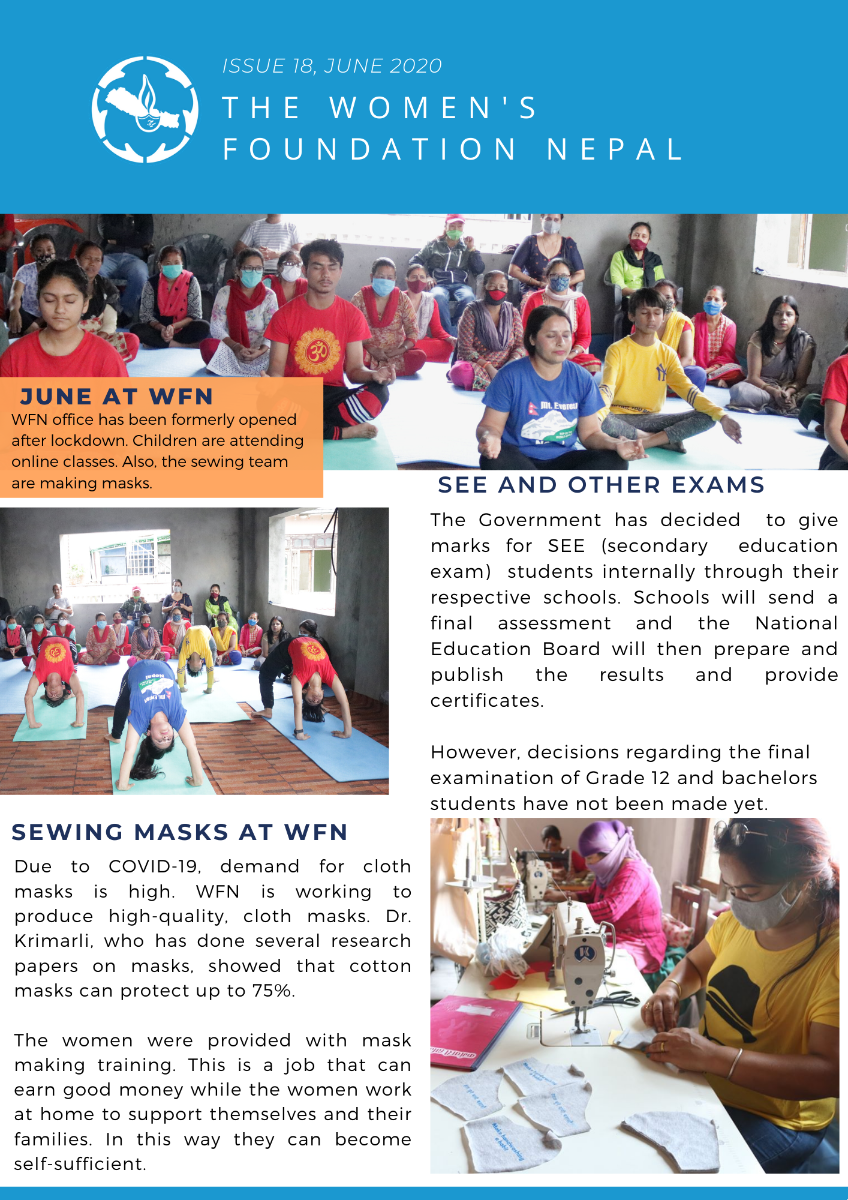 WHO’s guidance and advice on the use of masks to protect against and limit the spread of COVID-19. By contrast, the US Centers for Disease Control and Prevention (CDC) now advises the wearing of cloth masks.Due to COVID-19, demand for cloth masks is high .That’s why the Women’s Foundation is working to produce high-quality cloth masks Dr. Krimarli who has done several research papers on masks which show that cotton masks can protect up to 75%. Providing a space for a filter can increase this protection. Adding an additional filtration insert significantly improves the protective factor of a cloth masks.

The women were provided with mask making training. This is a job that can earn good money while the women work at home to support themselves and their families. In this way they can become self-sufficient. Issue Newsletter for the month of May, 2020 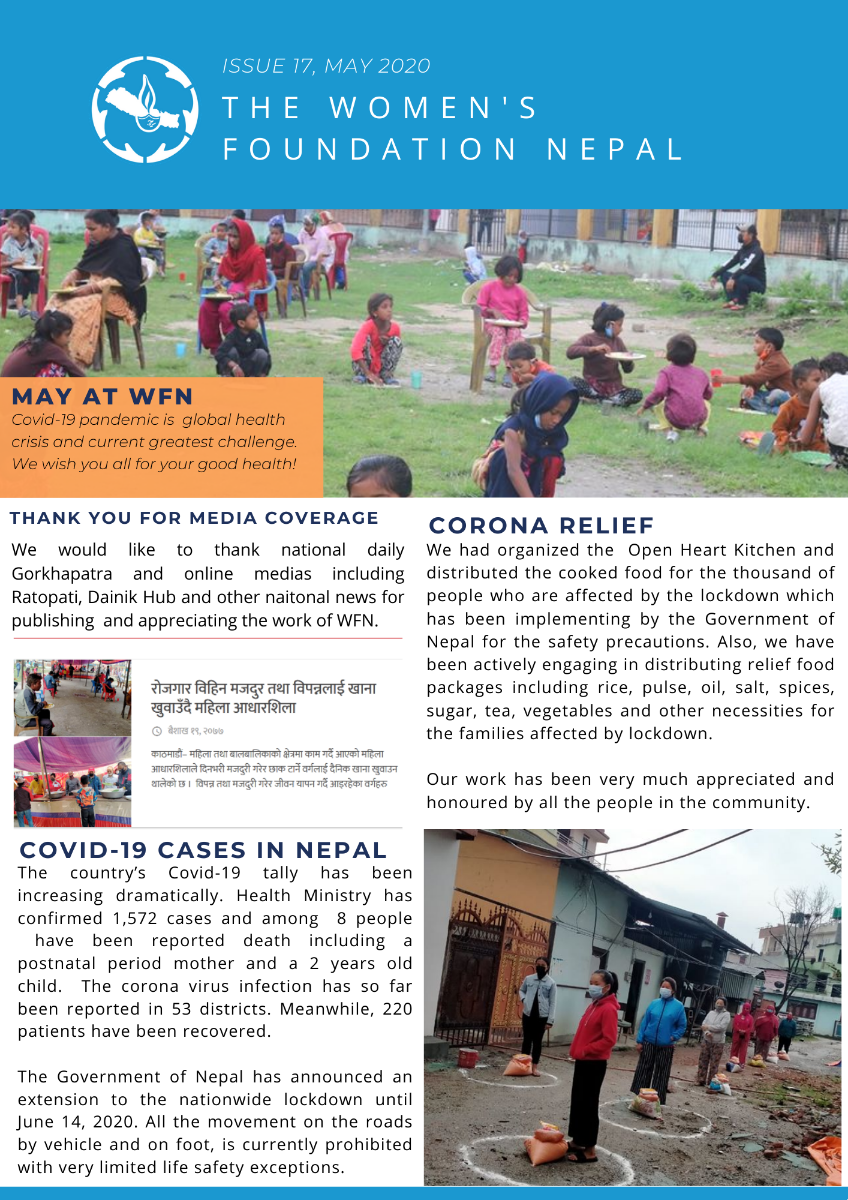 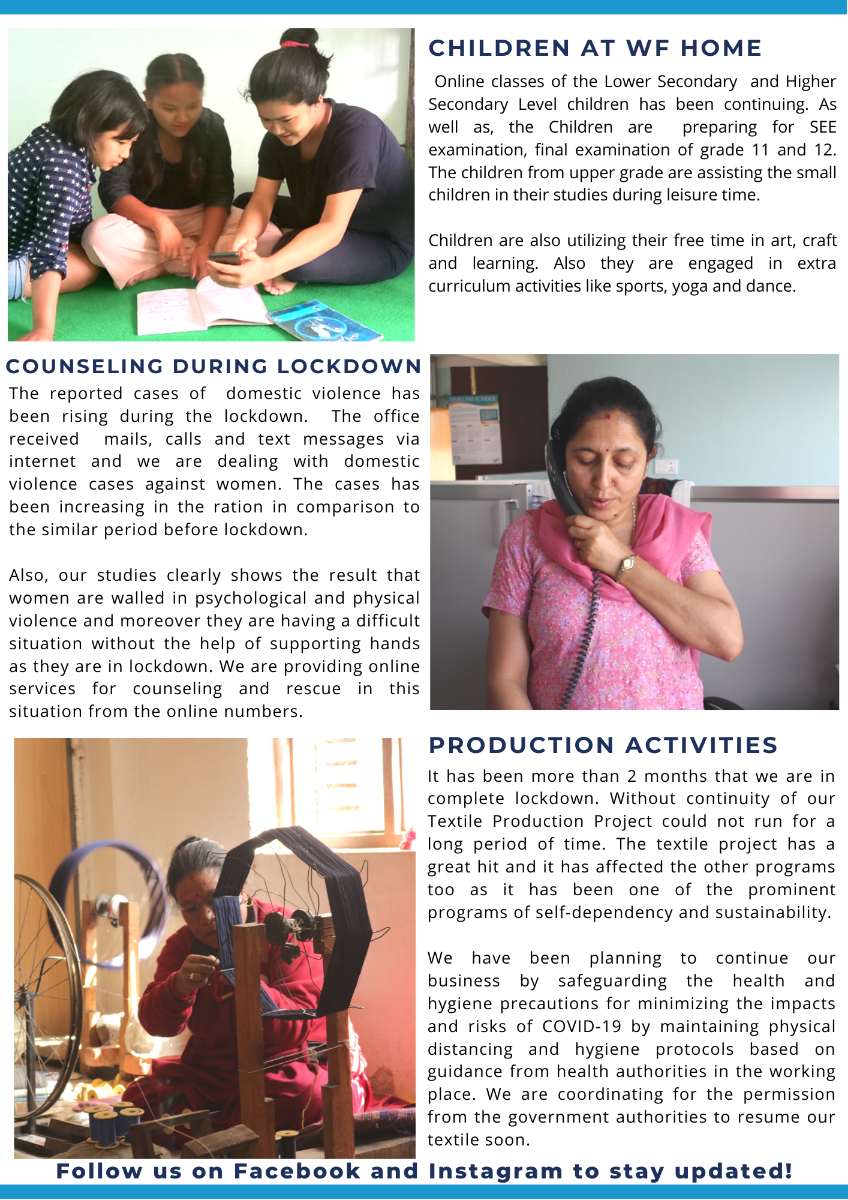